Pingora Exploration Company LLC was a privately owned oil and gas exploration company whose business was the generation, sale and drilling of exploration projects located in the Outer Continental Shelf of the Gulf of Mexico. Pingora was one hundred percent owned and managed by its three principals: Clay Harmon, Paul Waldo, and Les Clark.

Pingora’s geographic focus was the central portion of the GOM, in water depths of less than 500’. The Company used as its primary generating tool an inventory (either in house or available) of more than 3,000 blocks of 3D sewasmic data covering approximately 15,000,000 acres in areas between Galveston (offshore Texas) and Main Pass (offshore Louisiana). Supplementing this seismic database was a gulf-wide well database, production and engineering information accessible from the Bureau of Ocean Energy Management, Regulation and Enforcement (“BOEM”) and other sources. AVO and other proprietary geophysical processing and analysis were typically used to further quantify the reserve size and risk of the prospects generated.

Pingora acquired drilling rights on the prospects identified through acquisitions at lease sales, farm-ins, joint ventures or purchases from third party producer/owners. Once secured, the Company historically sold most available working interest to industry partners on a promoted basis.

Between 2002 and 2019 Pingora (and Juniper Exploration, L.L.C., an affiliated company) drilled 32 wells, 24 of which resulted in commercial discoveries, for a success rate of greater than 74%. The estimated total gross reserves from all discoveries was approximately 470 Bcfe, with an average F&D cost under $15.00/BBLE. As of April 2019 Pingora has a remaining drilling inventory of 10 prospects/wells.

Is a landman with 39 years experience. He has a BBA from the University of Texas and MBA from the University of Houston. He started his career with Houston Oil & Minerals in 1980. He left in 1981 to join Chappelle Exploration Company as a landman. In 1983 he joined Mark Producing, Inc. and in 1988 joined Tenneco Gas as a planning analyst. In 1990 he became a partner in Thompson-Clark Energy Company and in 1992 he joined Zilkha Energy Company. In 1998 he left to start Juniper Energy L.P. and remained until its sale to its limited partners in 2001. In 2002 he started Pingora Exploration Company LLC where he is currently a Manager/Member.

Is an explorationist with 37 years experience. He has a BS and MBA from Indiana University. He started his career with Tenneco Oil as a geologist/geophysicist in 1982. In 1988 he left to become a founding member of Newfield Exploration Company. In 1992 he joined Zilkha Energy Company and in 1998 left to start Juniper Energy, L.P. and remained until its sale to its limited partners in 2001. In 2002 he started Pingora Exploration Company LLC where he is currently a Manager/Member.

Was a talented explorationist with 38 years experience. He had a BS from Texas A & M University. He started his career with Tenneco Oil as a geologist/geophysicist in 1981. In 1990 he left to take a position as geologist/geophysicist with Union Pacific Resources. In 1998 he joined Sonat Exploration Company and remained until 2001 when he joined Juniper Energy L.P. In 2002 Paul joined Houston Energy Company and remained until 2005 when he joined Pingora Exploration Company LLC as a Manager/Member. Paul passed away unexpectedly in December 2018. 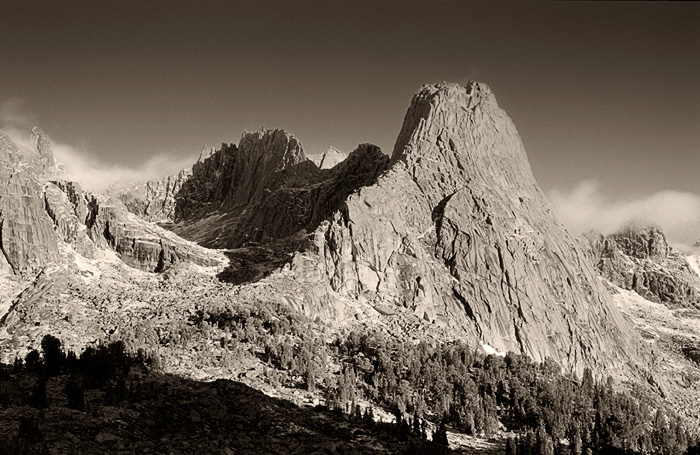 Is a beautiful mountain in the Wind River Range in Wyoming. There is no easy way to the top.